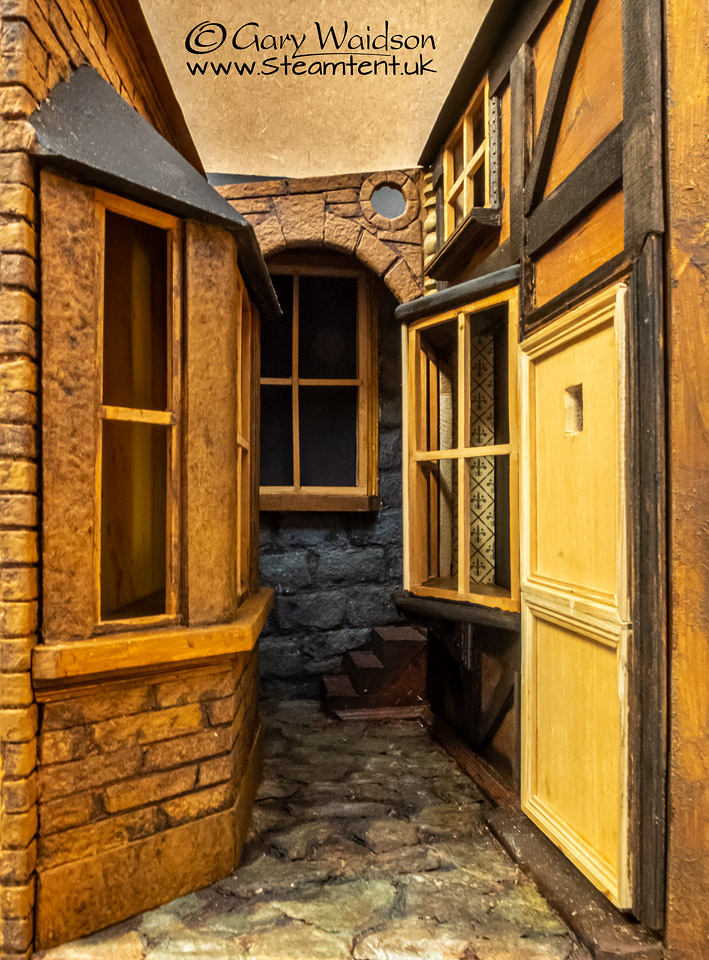 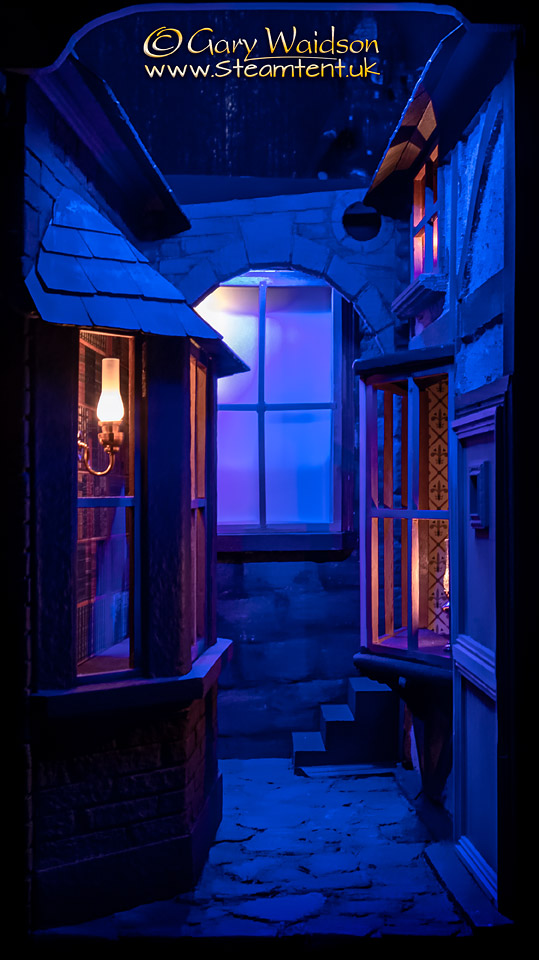 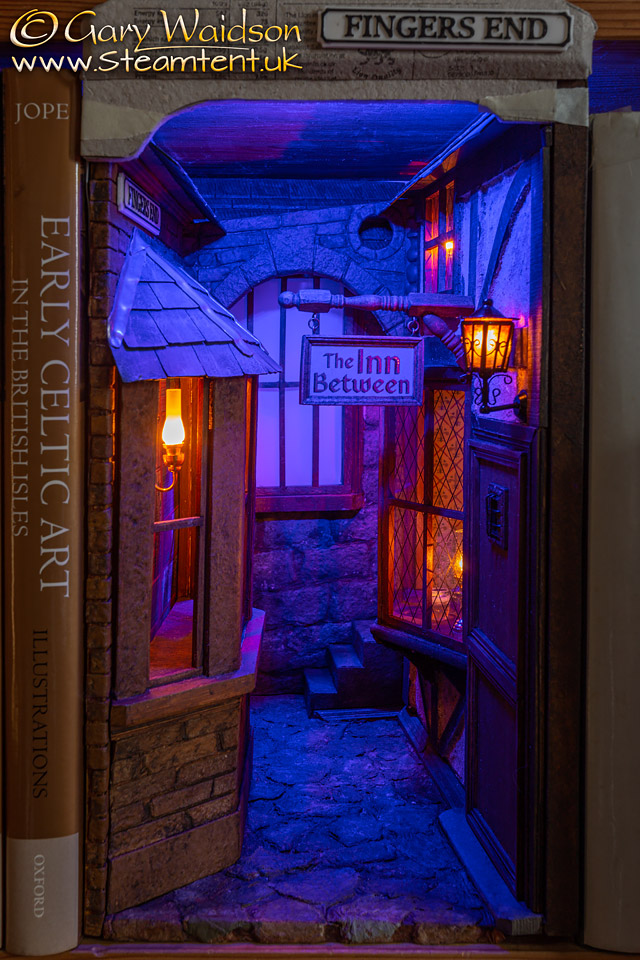 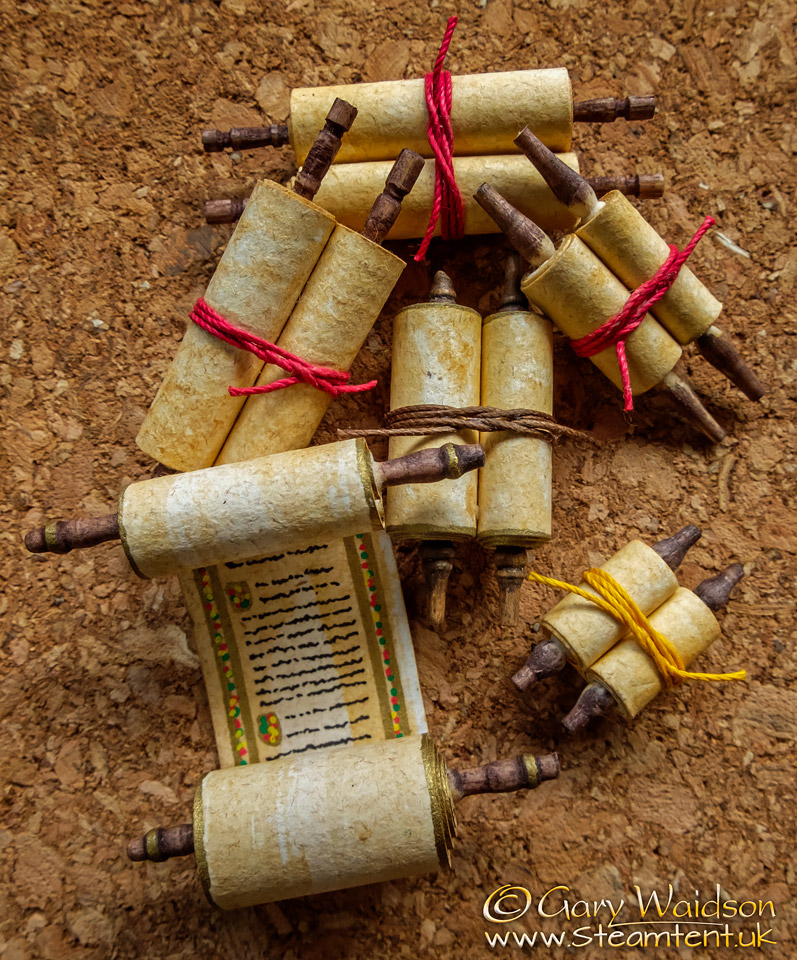 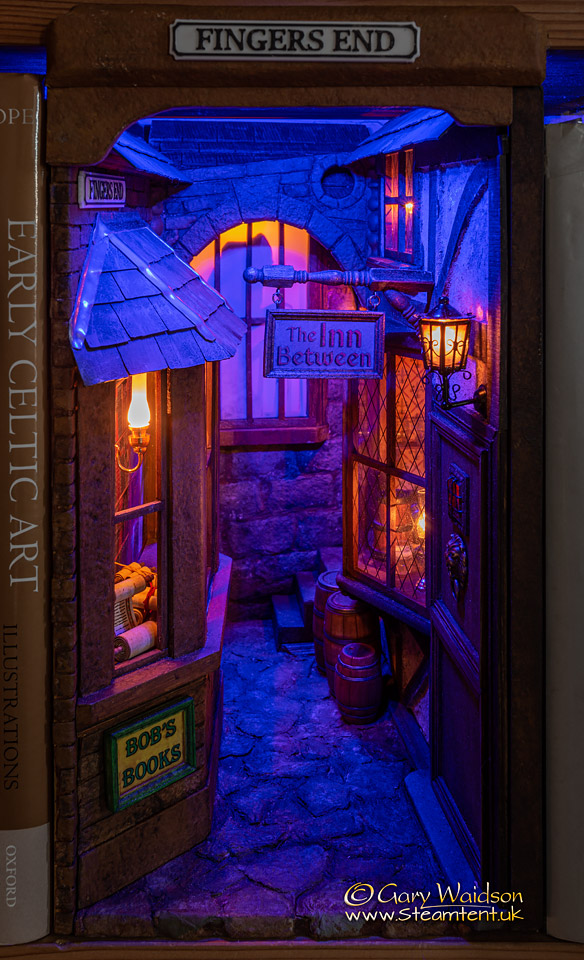 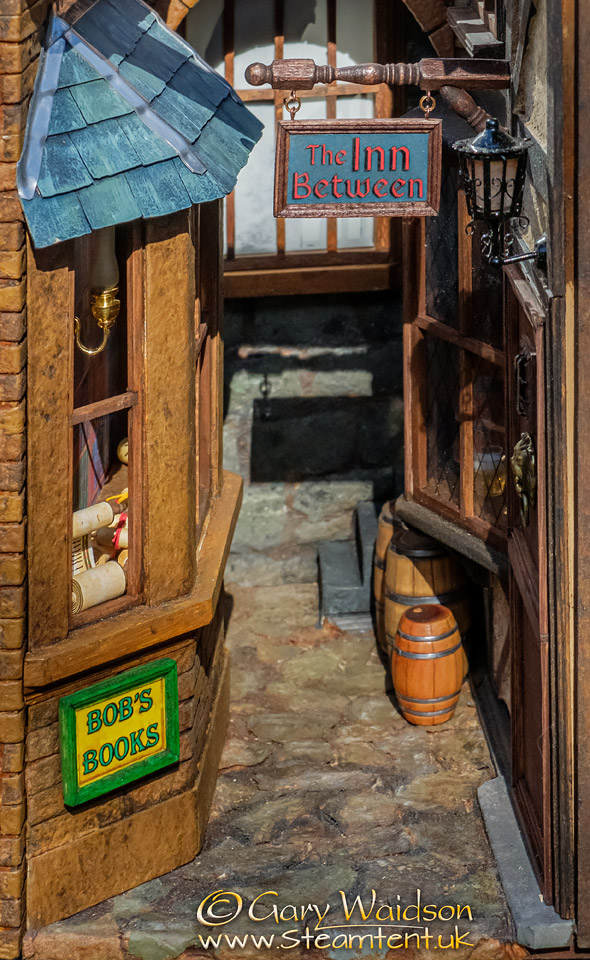 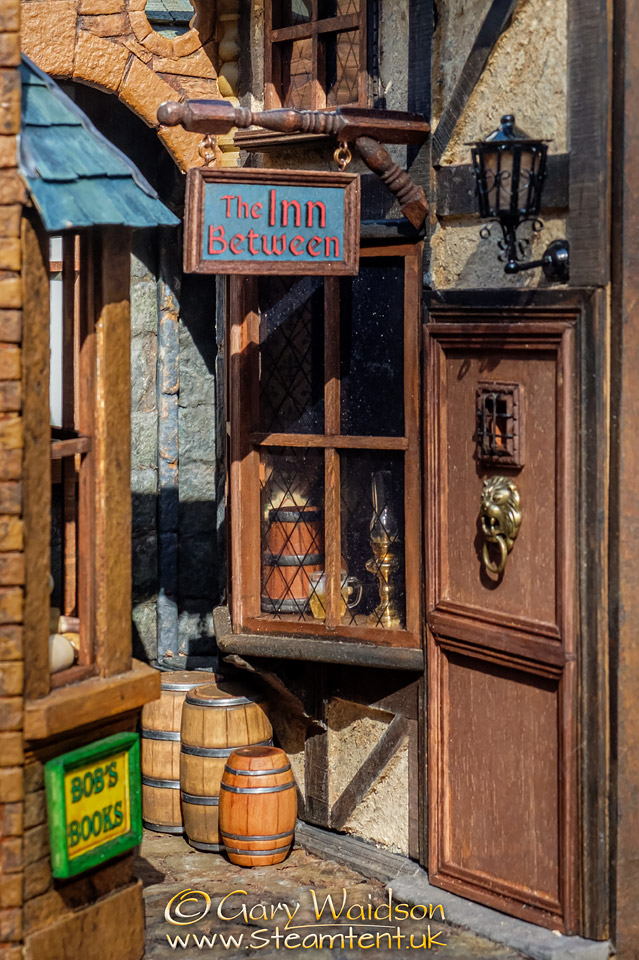 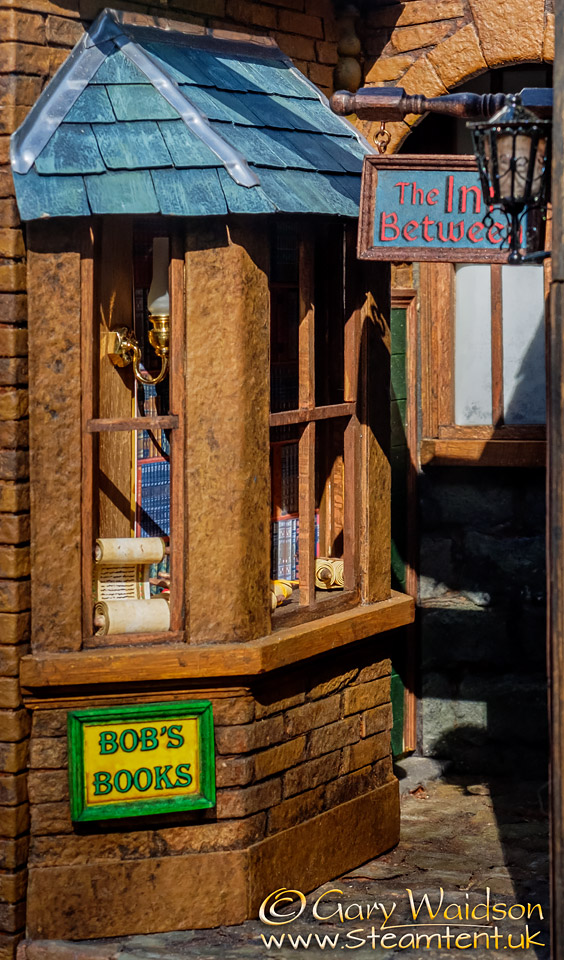 A book nook is a small diorama designed to fit on a bookshelf between, you guessed it... Books.

The background to this particular example is that having restored the dolls house made for Debs by her father, Bob, I was given a couple of carrier bags full of materials from Bob’s workshop which he had no further use for.

To me, it was a veritable treasure trove of useful materials for my Vardo project that would have cost a fortune to buy.

Included in this bounty were a few bits and pieces of half finished items for a project that Bob had been unable to complete.

It occurred to me that it would be nice to include as many of those items as I could into my first book nook project.

The basic construction was a four sided box made from some 6mm MDF I had in the workshop. Into this I fitted two false walls to create spaces for lighting.

From Bob’s shed I had a number of window frames and the majority of a bay window to work with. I planned how these could be incorporated on paper, paying particular attention to the view points so as to create the illusion of the alley continuing on round a corner.

The construction phase went very quickly and I didn’t take any pictures of that I am afraid but once the walls and windows were in position, held together by tape so that it could still be taken apart to work on, I could then start working on the wall textures.

I had seen an article on using egg boxes to imitate stone surfaces and was keen to experiment with this ahead of my next project, a gothic lighthouse.

The idea is simplicity itself. The “mortar” is laid down first which consists of kitchen towel soaked in PVA and some acrylic colour. This creates the rough texture between the stone.

Then the “stones” are glued on top with more PVA using the inside, rough textured surface of the egg box cardboard facing outwards.

Stones can either be cut for masonry or torn as I have here for the rough flooring of the alley.

Once the surface has dried, which can be assisted with a hair dryer, it is then painted with acrylics to achieve a very convincing stone effect.

For the tavern wall I wanted a different effect to simulate a half timbered construction.

The timbers were strips of wood, again from Bob’s hoard, which were attached directly to the MDF false wall which is angled in slightly to create a false perspective and a corner alcove at the end.

It was while fettling one of the timbers on a coarse disk sander that the timber flipped from my grasp and the next thing to hit the sander was the tip of my finger.

In a spray of blood and gore the tip of my finger was no more. This annoyed me mostly because it meant I had to pause the construction.

What it did do was provide a fitting name for my so far anonymous alley, “Fingers End”.

After a weekend’s camping, during which I also managed to  slice open the same finger while carving a wood spirit (I’m not normally this clumsy), I was able to create the infill wall texture which consisted of kitchen towel again but this time soaked in a mixture of PVA, acrylic colour and sawdust from the workshop.

The next job was to fit the lights. I was using four commercial dolls house lights. A wall mounted oil lamp for the book shop. A table mounted oil lamp for the tavern window. A  candle nightstick in the upper window and an ornamental wall mounted light over the tavern door. These were wired into plug blocks situated behind the walls but inside the box structure so that they could be unplugged if the false walls were removed for maintenance or bulb changing.

The additional lighting is provided by LEDs and SMDs concealed out of the line of sight in the structure.

The pictures above show the first couple of light tests. The blue light was far too dominant in the first so I cut the six SMD strips down to three which seemed much better. I also exchanged a warm white LED for an amber SMD strip of three as it provided a warmer colour and a much less directional effect.

In the far arched alcove, I had yellow and red flickering LEDs mounted to simulate fire light, a torch or a brazier, coming from round the corner. This added a touch of animation into what was otherwise going to be a fairly static scene. before the third test, I added another flickering LED behind the tavern door window.

Finally, I added the silhouette in the far window with a paper cutout mounted on drafting film.

All the lighting circuits were ultimately routed to a fused power connection block situated in the far right corner under the alcove step with the socket at the back.

In quiet moments during the construction I was also working on a few things to fill out the scene.

I had ordered a few books to put in the bay window and a “library wall” paper to create the book cases in the back but I had also seen a nice little tutorial on producing scrolls which I wanted to try out.

The handles are made with spindle turnings or cheap  Chinese bamboo toothpicks and the bindings are just linen thread.

The scrolls themselves are made from textured cartridge paper that I have washed with very dilute acrylic paint.

Part way through making them it occurred to me that I could illustrate one of them so that it could be displayed open in the window.

Using very fine paint markers I made the gold illuminated borders and chapter capitals and the “text” was produced with a 0.1mm technical pen and an unsteady hand.

I took the box outside on a nice sunny afternoon to get some daylight shots to show up the stone textures a bit more.

You can see I’ve also used some card tiling strips that I had left over from the dolls house renovation to roof the bay window and the tops of the walls.

There were a few wooden tile strips that Bob had made and I used some of those for the end roof.

All the roof lines were also flashed with self adhesive lead tape.

The signs were lightly printed onto coloured paper and then relined with fine paint markers before being varnished and distressed slightly with more paint.

The mouldings were more booty from Bob’s hoard.

There is just a hint of a door behind the bay window. Little more than a step, some mouldings to form a frame and lollipop sticks for the panelling painted green.  Again it adds the illusion of more dimension.

The barrels started life as simple wooden turnings with grooves. They were the right shape but needed work. The two large ones had tacky vinyl thonging glued in to simulate the barrel hoops.

I stripped them all down, carved a rim into the top and used a Scandinavian technique for decorating wood called “Kolrosing” to line in the staves.

With that done, I then used narrow strips of the lead tape to replace the barrel hoops.

The leaded glass of the tavern window was sourced on eBay as were the beer glasses and the lion head door knocker.

The grille over the door window is just stainless steel wire which has been heated to oxidise the shine. 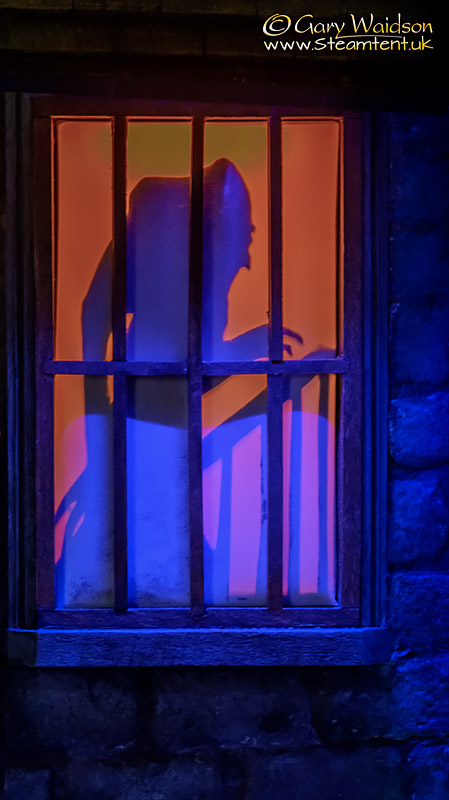 For those of you that didn’t spot it, a close up of the end window.

The silhouette of Max Schreck in Nosferatu is probably one of the most famous and recognisable in film history and seemed appropriate for such a blood soaked endeavour.. 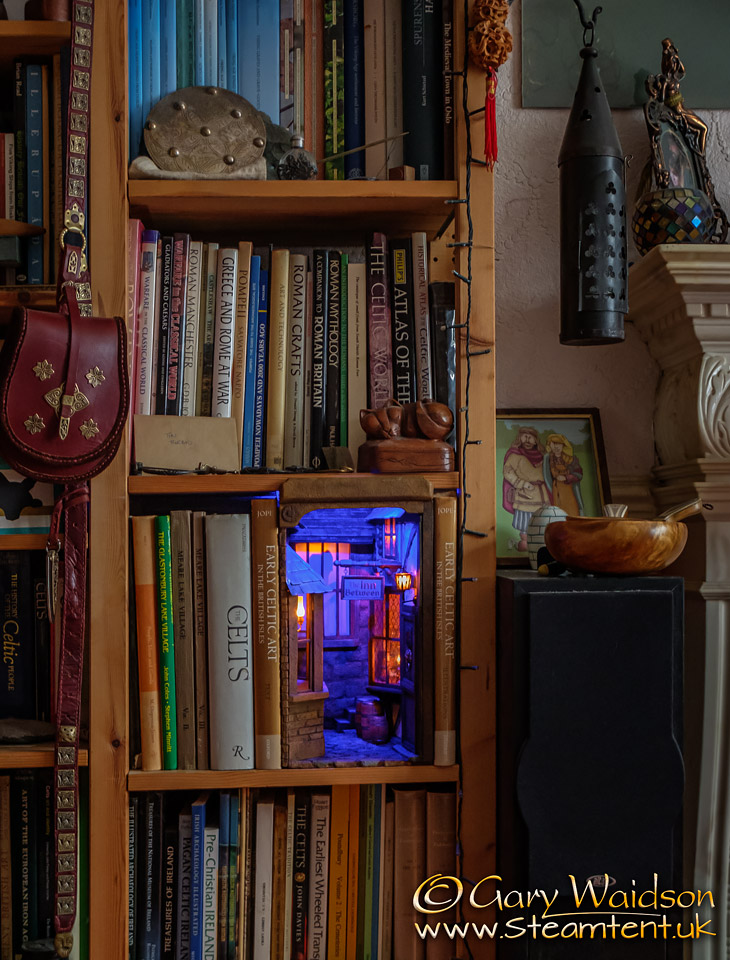 For context, this is where the book nook will be displayed most of the time.   Tucked in amongst some of the many books I use as reference for my living history work.

It runs off an old 12v power adaptor from an appliance long since demised. (I rarely throw such useful things out)

The lights are turned on by a switched power block out of frame at the end of the book case.

From our normal position on the sofa we can both see directly into the nook with slightly differing angles. 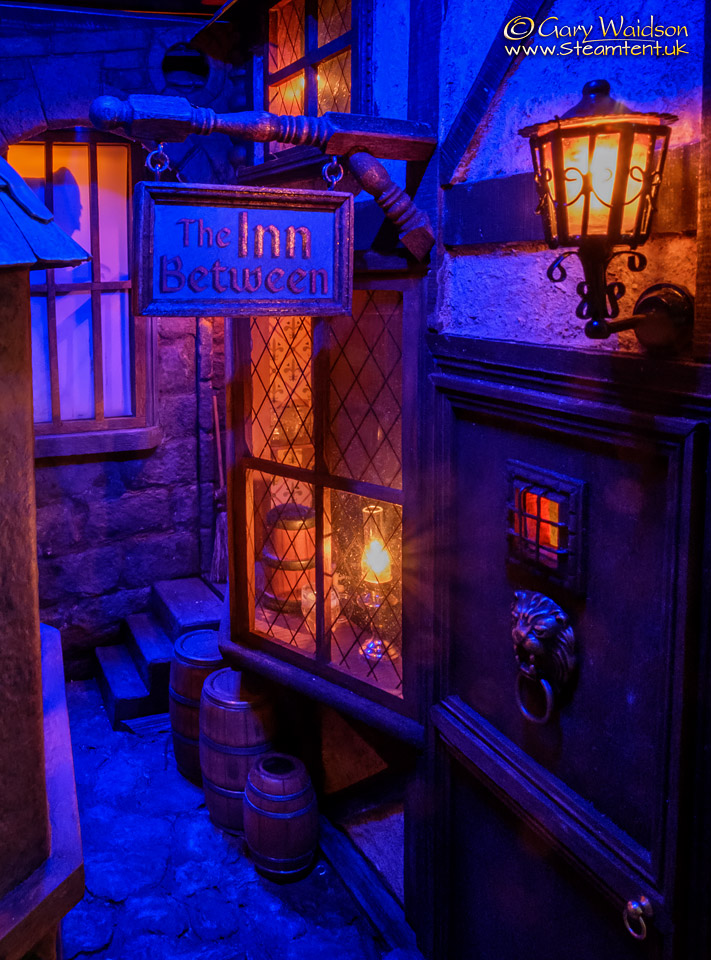 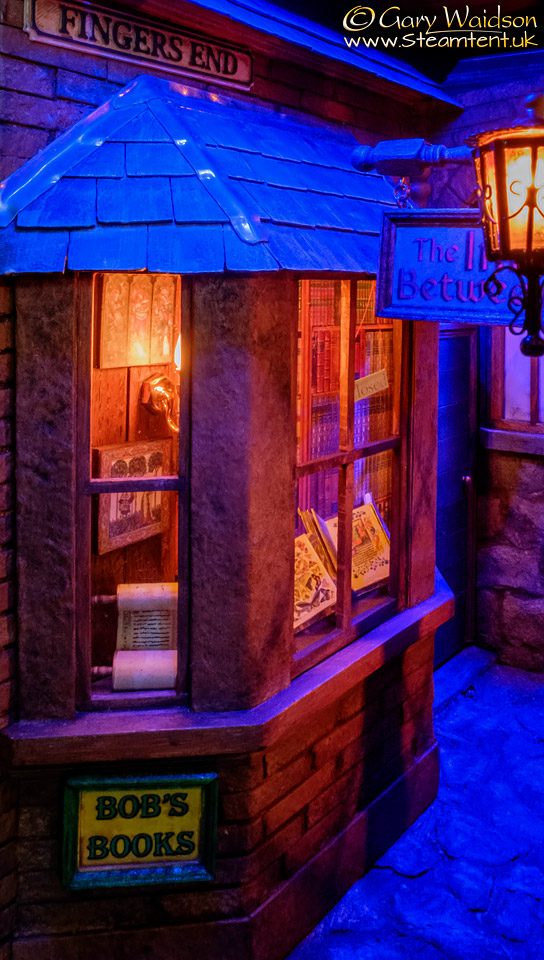 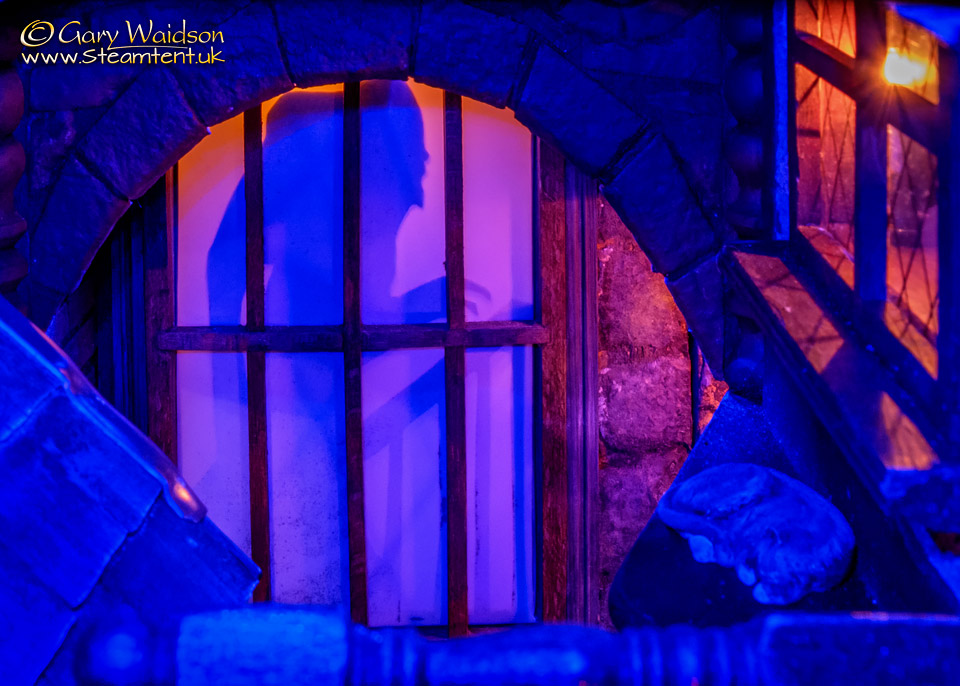 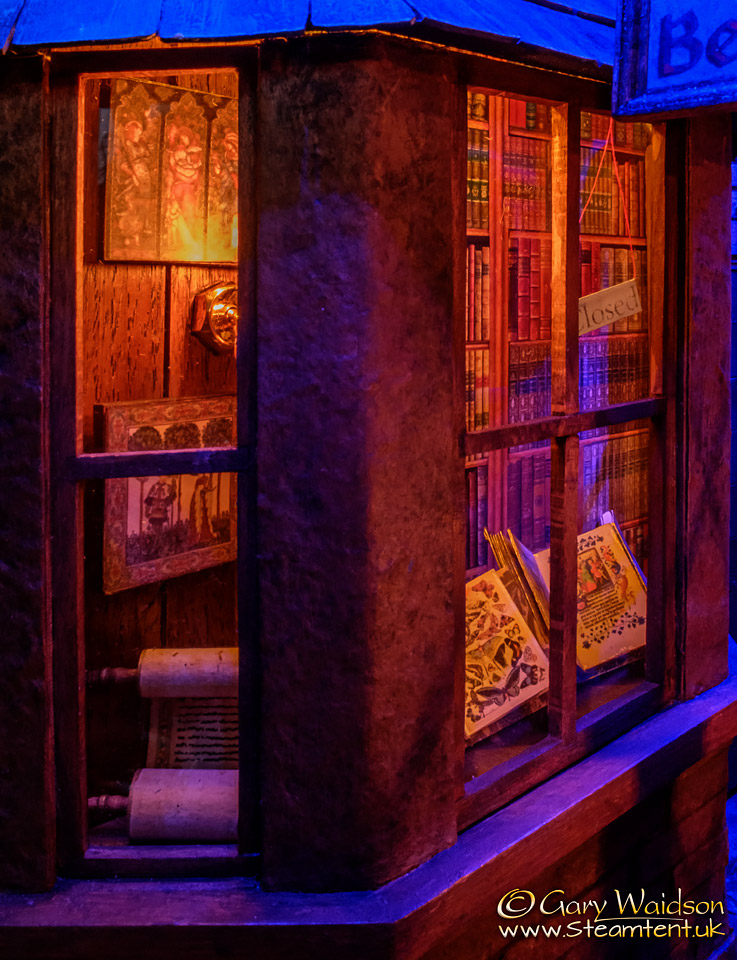 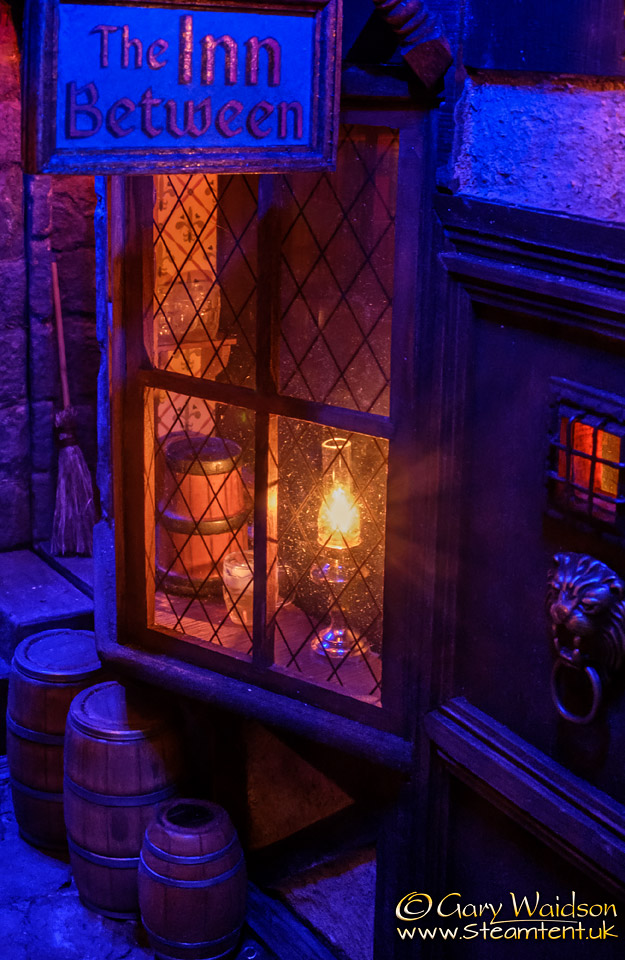 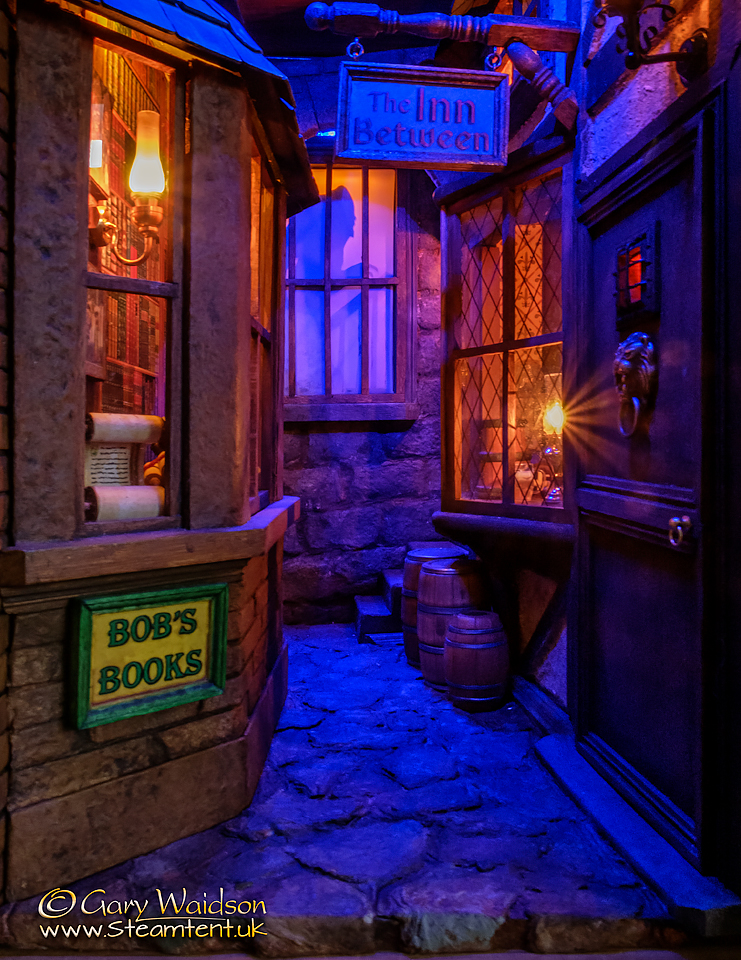 So I’ll finish off with some close up views with the lights on, as this is how it will most often be seen.

Here you can see the extra books that I ordered for the book shop, both nicely illustrated and in the right style for the set period. Also you can some “tapestry” blocks I obtained on the wall near the lamp.

In addition, I added a shiny brass door knob to enhance the door illusion.

A broom casually propped against the wall in the archway hints at some life there and a lost coin on the floor is a little bonus for people to spot. Like a Cuneo mouse.  Thanks to Debs for the idea, this may become a trade mark detail.

While something wicked lurks on the stair, the cat sleeps on blissfully content that it still has lives to spare.

The shop of course is closed at this late hour but there are still some beautiful books and scrolls to browse.

I suspect the shop keeper may not have strayed too far, in fact that may even be his pint on the window ledge.

The quiet tale of Fingers End...

It has certainly become an interesting point of attention in the room. Even Thumper takes a look occasionally.

If you enjoyed this project, take a look at my Vardo ( 1/12th scale Gypsy Caravan ) project or my latest project, Ammon Rock ( A 1/12th scale Gothic Lighthouse ) here. 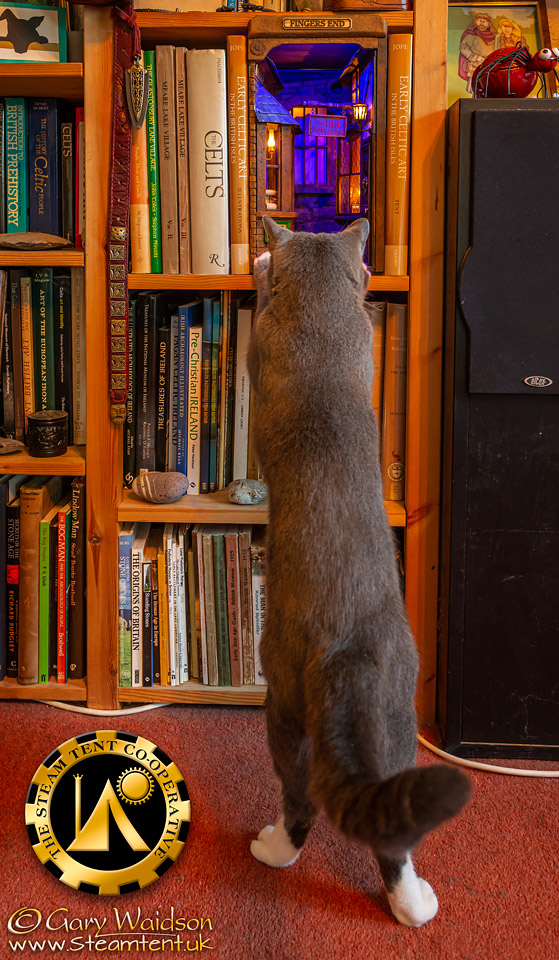