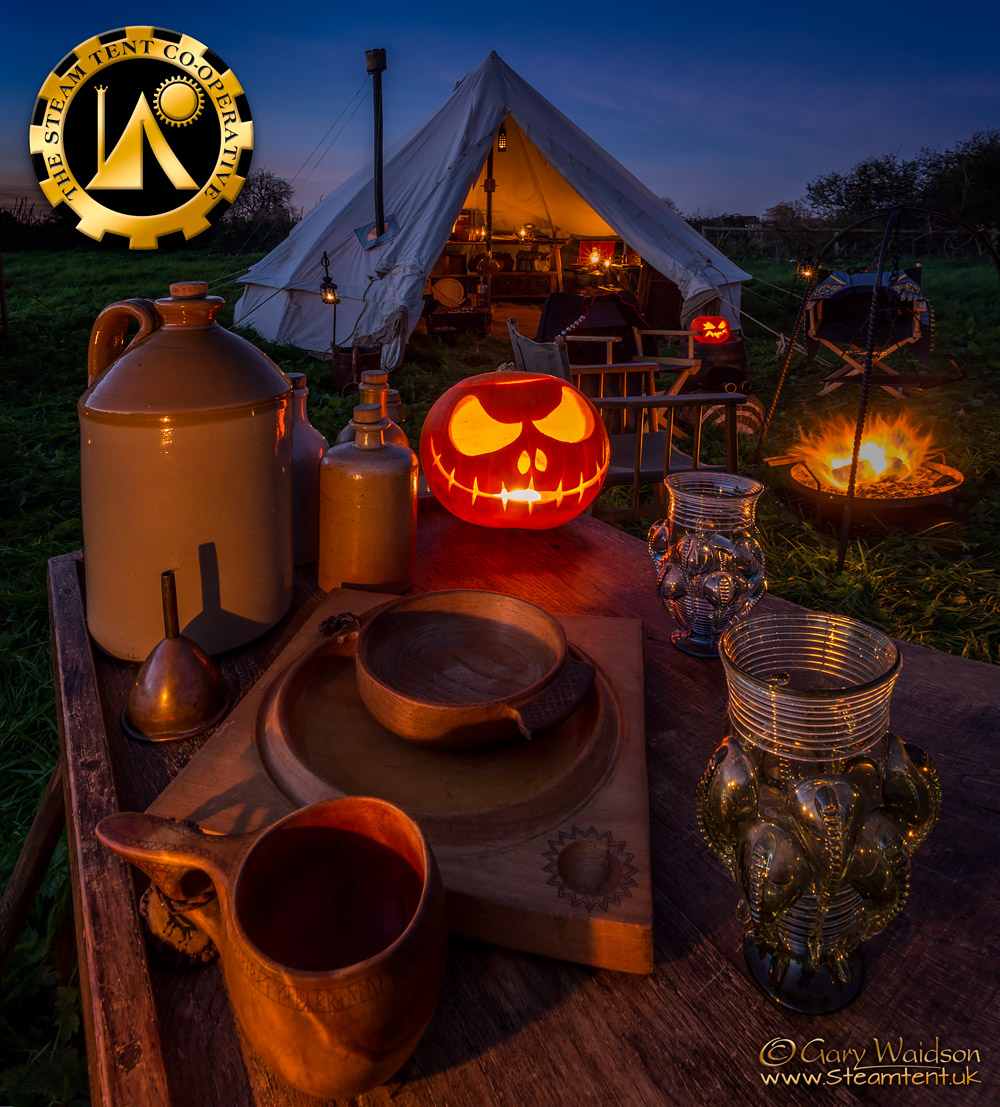 Let's start with one of the simplest of solutions first, concealment. When we are working on a living history exhibit there are many things we need that people of the past did not possess and therefore should not be on show. Principal amongst these for us is a cool box. We need food and we don't want food poisoning so we have to store it properly for two or three days, often in very warm conditions.

Usually the easiest thing to do is just throw a blanket or a piece of cloth over the top but placement can help as well. From outside an open tent there are usually blind spots that cannot be easily seen and this is an  ideal position to place any items that need covering up. That way if the cover slips, it is still unlikely to be seen. Additionally, this means that you can access the items being covered without anybody noticing, then the food is transferred into a suitable bowl or container without it's modern wrapping and can be carried into the public view.

This is part of the simple stagecraft that is commonplace on living history displays and in our case we should think of other members as if they were the public in order to enhance and maintain the atmosphere for everyone.

Although a blanket type cover is effective and versatile, a drawstring bag works even better, is easily made and can be used for packing your gear for transportation as well. Smaller bags can easily conceal things like your beer cans around the fire at night or the camera that you might want to pop out to take a picture because it all looks so great. The next step up might be a box which can conceal, transport and be used as a seat as well. You get the idea I'm sure.

A second approach to stagecraft is disguise. Make the thing you are trying to hide look like something else.

You are going to need something to sleep on and for many of us that will require some elements of modern bedding. In our case we have a wooden bed frame based upon a Viking Age example. In places where the public have full access, we use a feather mattress and blankets for the bedding but as we are getting older we have opted for a poly foam mattress and a hollow fibre quilt where it matters less. We still don't want the nature of these things to be visible so we wrapped the foam with a cover that looks like a linen mattress cover and we took two double blankets, and sewed them together down three edges to make a blanket like quilt cover. The modern pillows are wrapped in the  drawstring bag that the quilt is packet in and a bed spread then goes on the top, job done.

Of course, not everyone is going to have a wooden bed frame, air mattresses and metal folding beds are very popular but can be disguised in much the same way. Paint can be used to change the appearance of metal legs and cheap calico cloth can be used to make a cover for an air mattress. A blanket or bed spread will do the rest.

Another form of stagecraft is to find something to do the same job that actually looks the part. 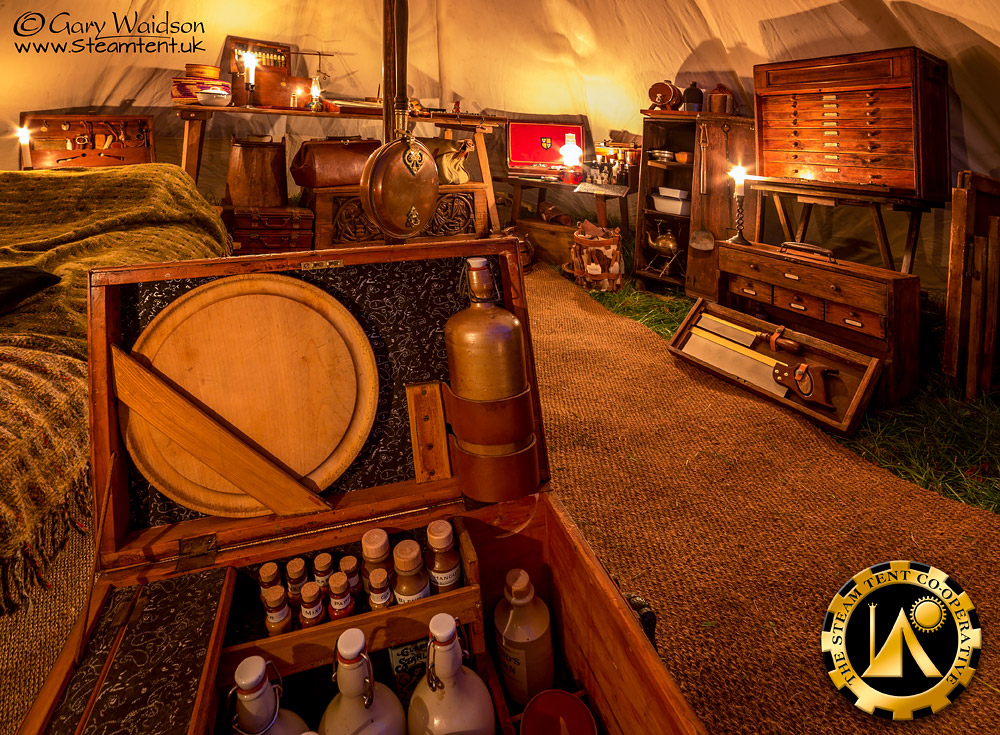 Chairs for sitting around the fire at night are a great luxury and modern  camping chairs can be covered with blankets of course, but a wooden folding chair looks much more in keeping and can be found quite cheap at boot sales or junk shops. Most of the common designs, including directors chairs, go right back to the 1800s or beyond.

Sure, someone looking real close might notice the fittings are made of the wrong metal or the screws have got cross heads but who is going to be looking that close?

In re-enactment, many groups have an unofficial "10' rule", if an inaccuracy is not visible at ten feet and is never going to be that close to the public then don't worry about it. For our purposes we can afford to be even more relaxed.

Unlike re-enactment we do not have to be 100% historically accurate for a paying audience. What we are building is like a film set that creates an illusion or convincing atmosphere and we ourselves are the most critical audience. If it looks OK to us, it should look good to someone  else as well.

Old tools are usually cheaper on boot sales than new tools in the shops. Old  cutlery, pewter tankards, glass or stoneware bottles can all be found for pennies compared to the expensive modern equipment sold in camping  stores.

While you are out looking for those things you may well find that perfect old wooden camp cot or a battered but perfectly functional hurricane lamp going for a pound.

These suggestions are all based upon making things look old fashioned of course but what about Steampunk? Things do not all have to look like a re-enactment of Victorian times. Once you start making things in a Steampunk style then the sky really is the limit. Perhaps the Heath Robinson contraption by your tent folds out to become your jet pack or portable time machine, who knows? It might even serve a useful function that replaces something else that you might have to hide.

Making stuff also opens other possibilities such as building a cover for your cool box that looks like an old fashioned hay box, you might even decide to make a real hay box instead, why not?

For me, the opportunity to find creative solutions that enhance the atmosphere we are all hoping for is a big attraction to this project. Much of my spare time lately has been taken up with renovating old things, building new ones or just tinkering about with something to make it fit the bill. Searching the junk shops and boot sales has gained new purpose and energy.

Personally, I'm running short of new things to make that are portable enough for promenading around between the market stalls at events these days. Steam Tenting gives me somewhere to create and show off some bigger curiosities. I for one am enjoying the potential in that. 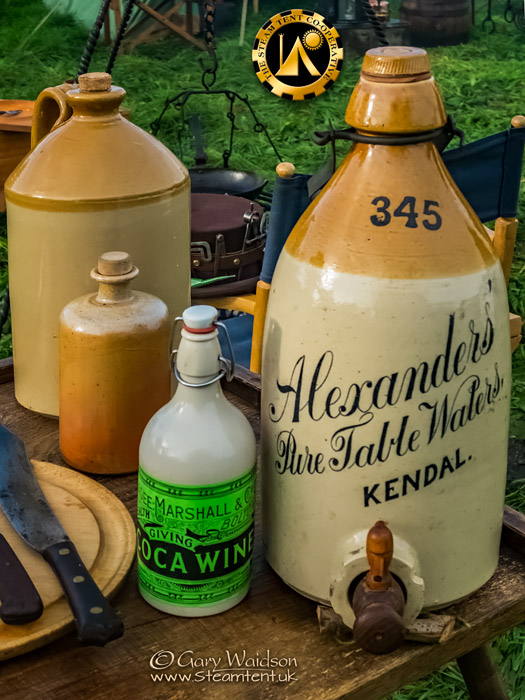 In the Steam Tent Co-operative we are setting out to create encampments that have an Old School / Steampunk atmosphere. For most of us that probably means something that looks vaguely Victorian / Edwardian with the addition of some fantastic retro-futuristic elements.

In reality, we are normal people with modern requirements and concerns. As such we expect things like safe food packaging and storage. We need a good nights sleep on a comfortable bed and we all like a few creature comforts.

The challenge is to incorporate these things into our pitch without spoiling the illusion for everyone else. Occultation is central to the art of stagecraft.

Stagecraft is often about the little things we can all do that maintain the illusion we have created. Modern life includes many things that could easily destroy that illusion but most of them are easily handed in ways that can reduce their impact.

Keeping food wrappers out of sight, behind the canvas of your tent, was one example as I described earlier but transferring your drink into a suitable bottle or drinking vessel is another simple trick. It just requires a  little forethought and planning.

If your favourite tipple comes in cans then a drawstring bag under your chair will keep them out of general sight. Pour your fresh drink into a tankard and put the empties in a plastic bag, inside the cloth bag, simple. This also helps you take it all away with you when you retire to your tent at the end of the  evening.

Nobody is expecting the level of performance that a living history group delivers, where the public should never see or even hear anything that would be out of place in the historical setting being depicted.

Ironically, I have worked with many such groups and what is often disappointing is that the moment public hours are over, everyone just gets their modern stuff out and sit around the camp fire in a litter of beer cans and plastic bags.

To me this just seems to miss the point. I for one did not get into living history because I  wanted to put on a public performance, I did it because I wanted to live like a "Viking" or whatever as far as was possible under modern conditions. Such groups need to do public shows so that the clients will let them set up on their sites. Most of the payment for these shows is devoured by the insurance that they need to do such public shows. Why then, when the public finally leave, do we not just enjoy what we have actually created ourselves?

Nothing will spoil the atmosphere we are all trying to create faster than a field of discarded beer cans and modern detritus around the communal areas. It's really not difficult to avoid if everyone takes a little responsibility for what they are doing.

Modern items will inevitably appear from time to time. Few of us are going to produce a wet plate camera to take a photograph for example. By all means use your mobile phone but put it away again when you have finished. We can all do things to minimise those moments so that others can enjoy the world we are creating as much as possible.

Trust me, the effort will be well worth it.  Most importantly, let’s all have fun out there. 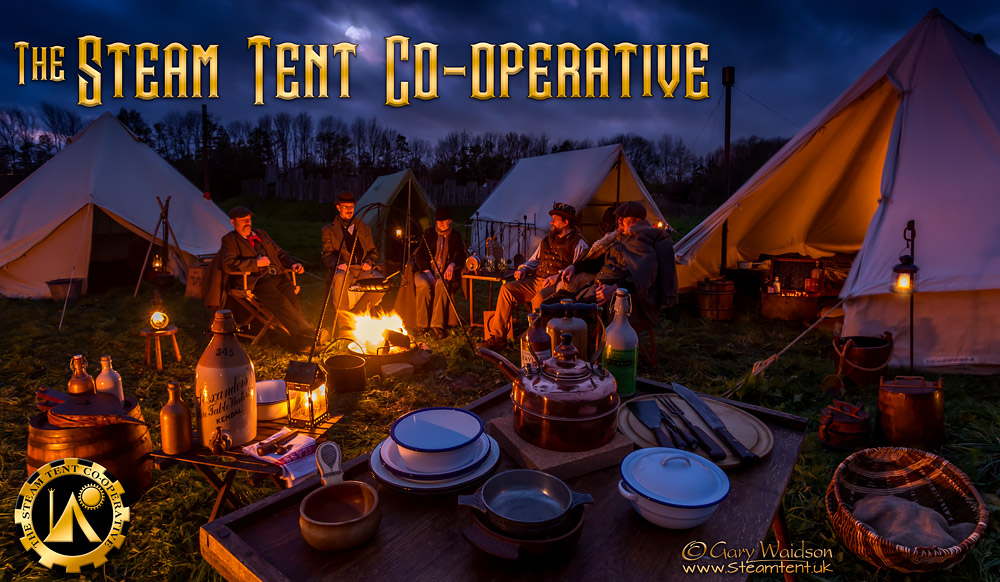 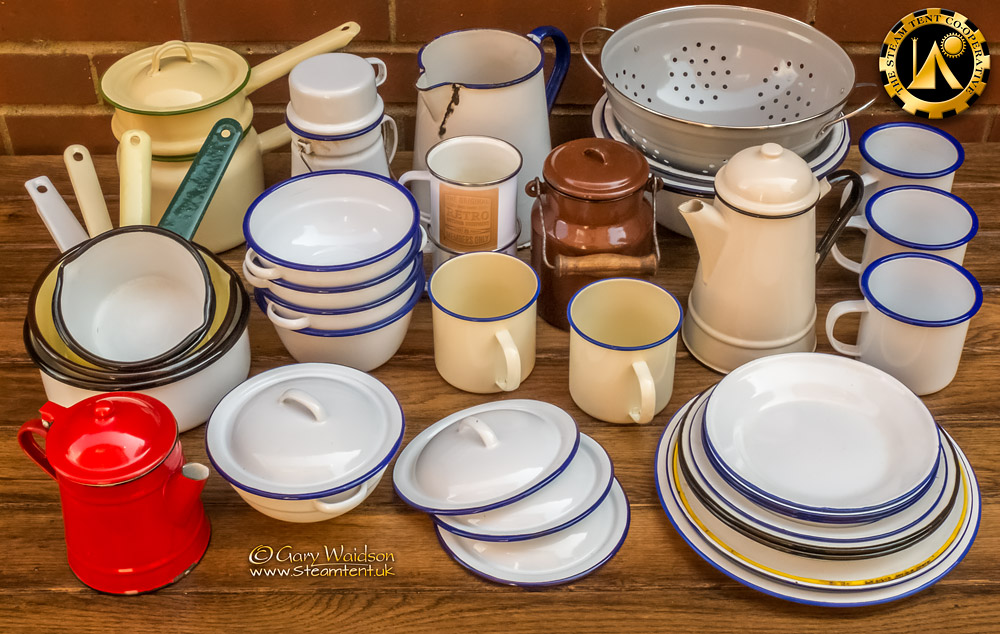 Perhaps the ultimate form of stagecraft is to use the real McCoy. Most of the requirements that we have in camp these days have not changed in the last hundred years or so. Some of the solutions that the Victorians found are still available today either as originals or reproductions. Many of them are even enjoying a fashionable revival at the moment such as enamelware bowls, plates and cups.