The question I find myself answering more than any other on the FaceBook group is:

”How can we turn up if we haven’t got all this stuff yet?”

The important thing to realise is that the pictures you see above and on other pages of this site or the group pages are selling the dream. These sort of pictures show the ideal that we are all striving for.

Debs and I have been collecting stuff like this for decades, I also have a van to transport it all around in as well. It would be absolutely crazy to expect anyone to turn up with even a tenth of that much gear on their first camps and although I might be a bit bonkers, I’m really not quite that mad.

Part of the reason we bring so much stuff to events is so that others do not have to. Much of it is for communal use, we are a Co-operative after all. It is quite possible to turn up in the clothes you are wearing with a modern tent and still take part in camp life. It is also possible to just come on a visit to see how things work and have a chat with us. We want you to get involved and we will do whatever we can to make that possible for you.

Most of what I am going to say here can be found in more detail on other pages of this web site, do take a look around, but I’m going to summarise it here so that it is all in one place. 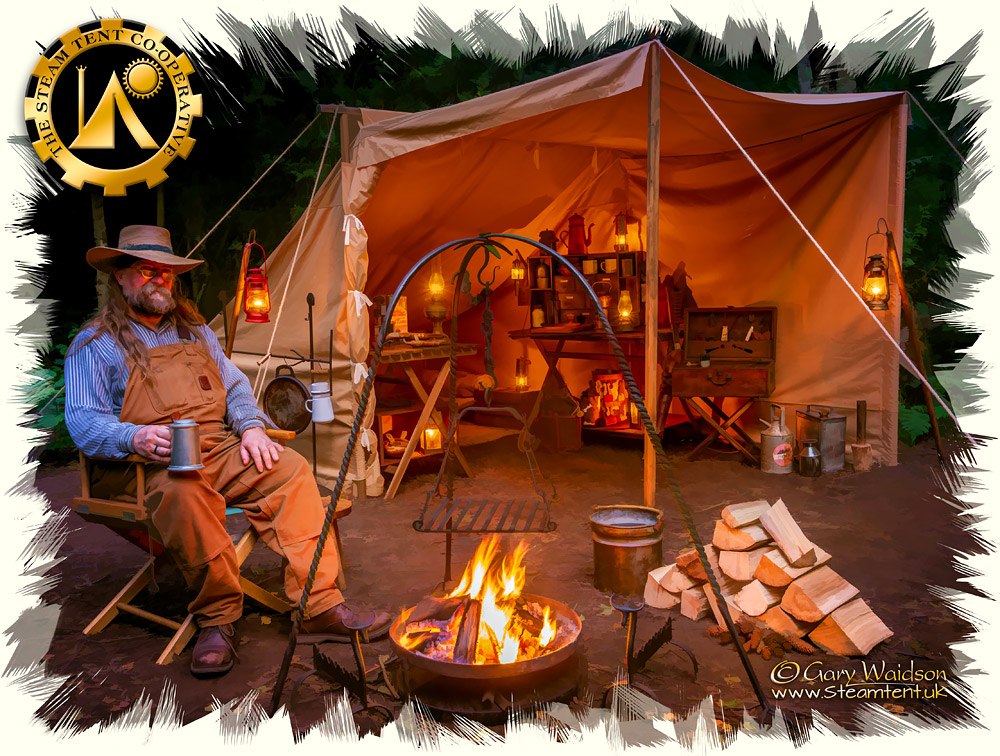 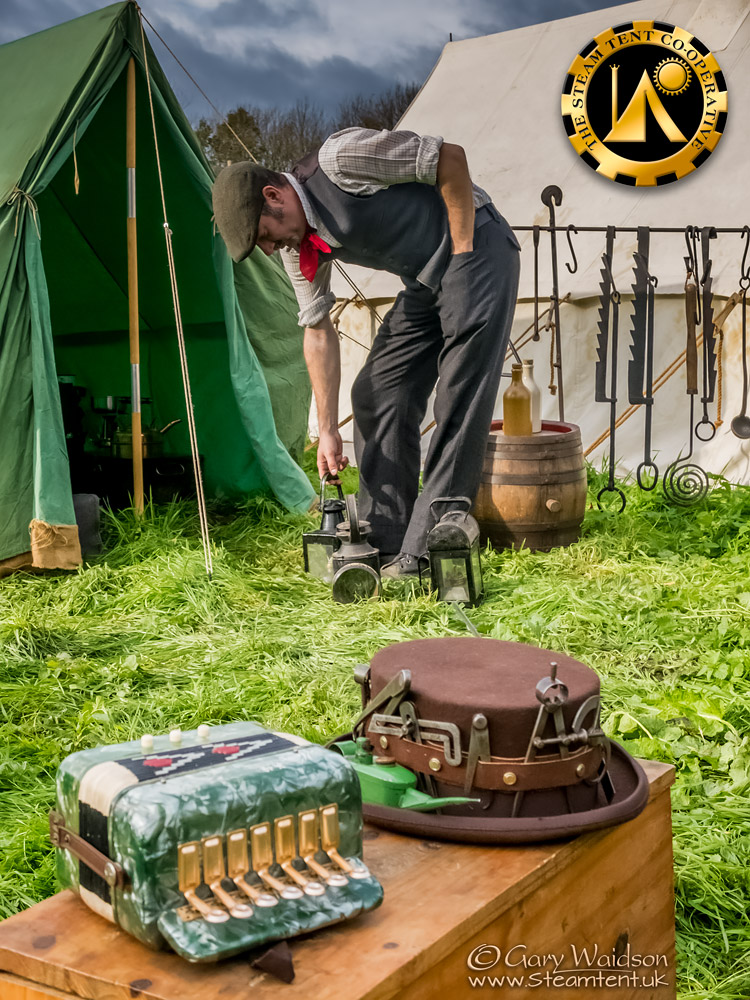 First of all, lets look at clothing.

The emphasis here is practicality. You want to be comfortable and safe without it costing the earth.

Take a look at the tag line at the top of the page, “Camping and Outdoor Life with an Old School / Steampunk Twist”

That is pretty vague and it is meant to be.

Generally we favour an old fashioned look that extends from the Victorian age to the inter-war years.

Take a look at Rob  in the picture to the left here.

Nothing he is wearing could not be found in a modern high street store but the way it is put together creates just the sort of  old fashioned look that fits in so well. 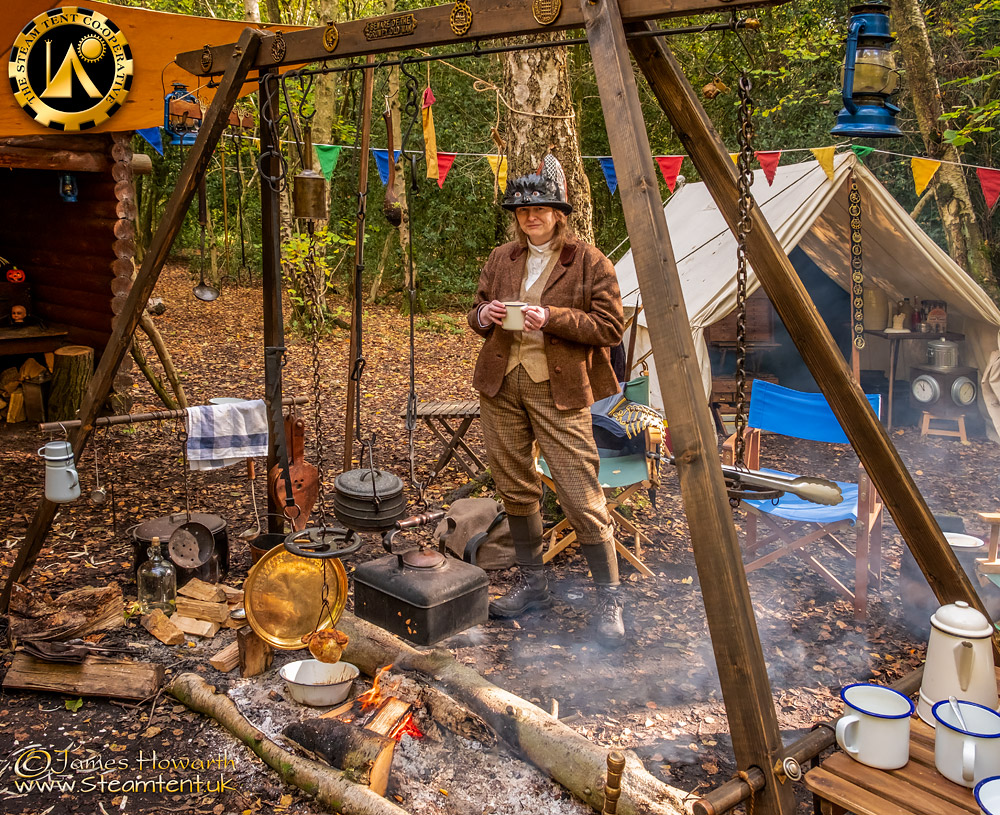 Admittedly, it is not quite that simple with women’s clothing, the tides of fashion move much quicker there, which can make practical retro looking modern clothing a bit more difficult to find.

Fortunately, charity shops accumulate lots of outdated ladies fashion and Debs is modelling a country style outfit above completely found in such sources. Note however the modern footwear. It blends in because it is not bright and flashy but it is also dry and comfortable. Remember, practicality is the watchword.

“Old School” covers a wide variety of styles and the “Steampunk” tag covers an even greater range of possibilities. You can see more on the subject of clothing here. 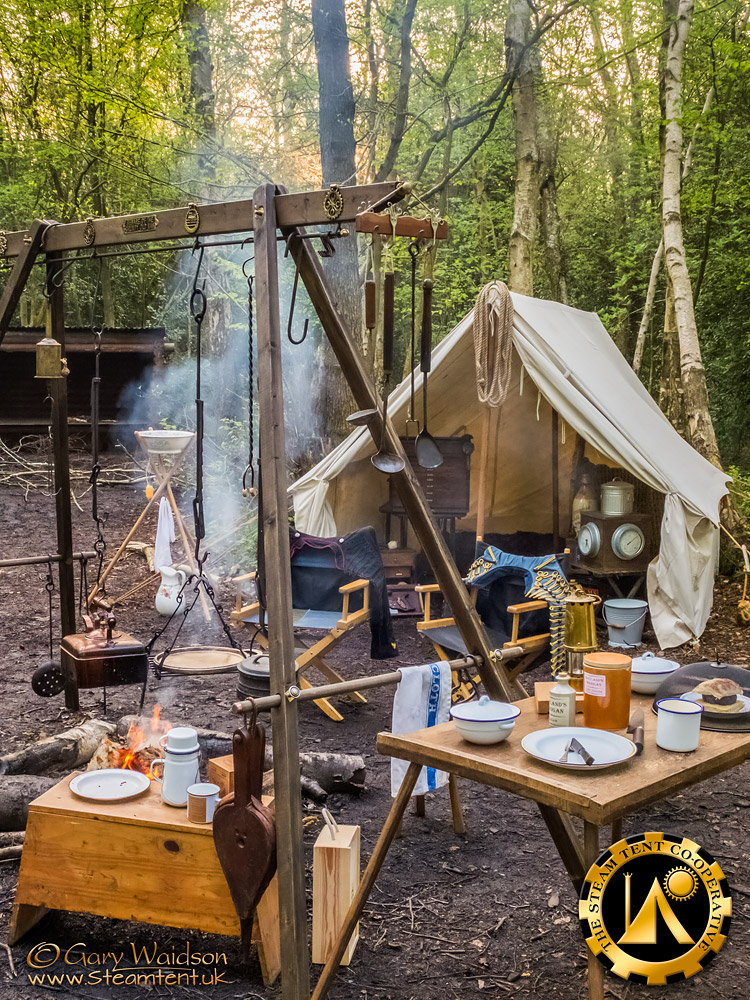 There are a few things to point out in this picture. First of all is the fire rig.

The fire tends to be the communal heart of the camp and it is equipped with cooking utensils that are available for all to use.

This means you don’t have to worry about that kind of kit because we already have it and you can use it.

The utility tent in the rear of the picture contains tools and other equipment that can also be borrowed if needed.

We tend to favour wooden  camp chairs because they blend in well. If you can bring one for yourself that is great. If not there are usually some spare and  boxes like the one you see in the foreground can also be used as seating.  If push comes to shove, a blanket thrown over a modern camp chair does not look too bad either.

Enamel mugs and plates serve well for eating and drinking. They are cheap and easily available online or even in some supermarkets as they are having a bit of a revival at the moment. Don’t worry if you can’t find any, we have some of that and cutlery available to share as well. All we ask is that you return it as you find it.

That just brings us to where are you going to sleep. Do you see the bushes behind the tent? Can you see what is behind those bushes? No? Well nobody can but there is a modern tent with all it’s modern amenities there. When we say that there are areas that we can have modern tentage, that is what we mean. It’s not in another camp ten minutes walk away, it’s just hidden in the bushes so that it doesn’t disturb the general atmosphere of the camp. 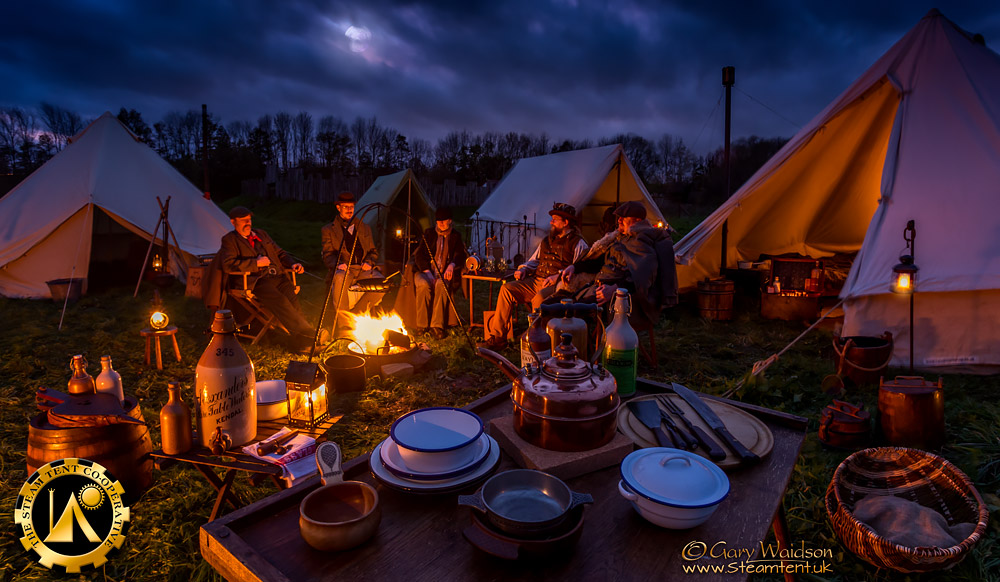 Another picture to look at. This was taken at Halloween 2017, the group was just an idea at that stage, we had four tents that looked OK and only enough kit to dress out two of them. We hadn’t even built the fire rig at that point. The idea of that photo shoot was to create some pictures to show people what we wanted to achieve.

If you are lucky enough to have already found a canvas tent that looks the part but you haven’t been able to dress it out yet, don’t worry, just leave it closed up. It will still add to the general look of the camp and you can fill it with goodies as life moves on. Half the fun is the journey, scouring boot sales and junk shops looking for that next bit of gear. Not having it all yet means you can just enjoy the hunting.

That image remains our FaceBook banner picture to this day because it shows us how it all started. Five people, sat in a field thinking, “Wouldn’t it be cool if we could make this happen”.

That is the dream we are still selling.      Why not join us?